Welcome to Trent’s Studio and art gallery, featuring the work of Trent Altman. 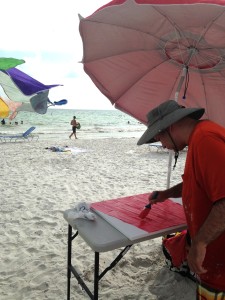 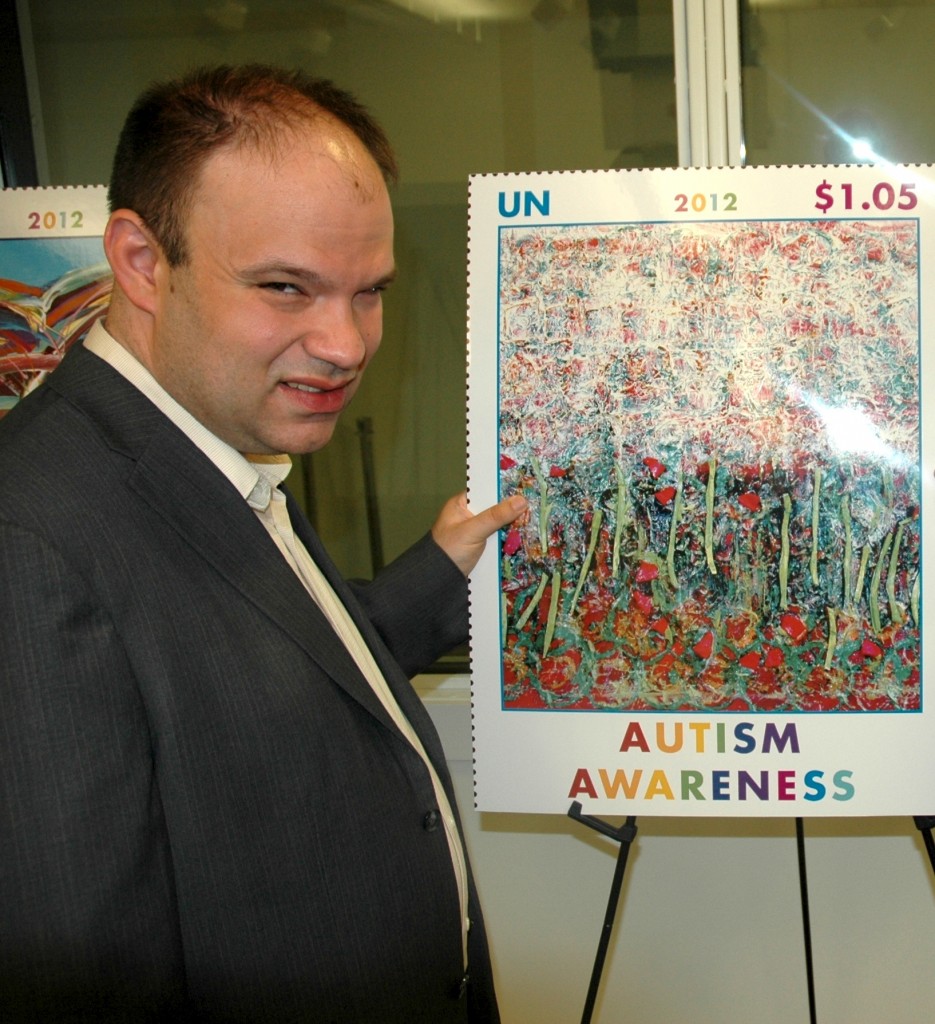 Altman’s art is an interpretation of matter while
consuming his environmental sense of sight, sound and scents. His paintings are beyond bold and dramatic. Altman’s use of multiple layers, and his distinctive style result in a monumental flow of intimately muted colors and 3 dimensional textures on canvas, writes Dr. Rosa Martinez.

“The paintings of autistic artist Trent Altman are richly evocative of the experience of being outdoors: the roughness of sand, the salt of a sea breeze, and the blue of a cloudless sky can all be deeply felt in his work. It’s no surprise, then, that Altman is most inspired by the beauty in nature. By employing sumptuous pigments and experimenting with unconventional materials to create texture, Altman conveys his own experiences in a clear and direct way that demands the attention of his audience.” writes Agora Gallery, NYC

Artistically “Altman’s images are transformed into [the] patterns High Analytical Cubism of Picasso and George Braque… It is a calm world transformed by metaphysical beauty and created by poets such as John Donne and George Herbert. Altman’s aesthetics has joined this group of visual and literary artists… [and is] your visual guide of human emotions, dancing to the universal rhythms of nature on another dimension,” writes Yvonne Mikulencak, M.F.A, and retired art history professor

Altman is a 17- time internationally awarded visual artist. Some include: the art design for the 2012-United Nations Stamp, 2012; Strokes of Genius, Inc Artist Achievement Award, 2012; McCarton Foundation NYC Artist Award Honoree; the Internationally Naturally People’s Awards INAP, 2013, and a documentary “An Art for Expression” made about Altman’s art making was nominated to the national Academy of Television Arts & Sciences for an Emmy Award, 2014. He has gallery representation in Canada, Naples, FL., Louisville, KY, and Nashville, TN.

“In my studio, on tables in my backyard, or on the beach on a sunny day, give me the opportunity and I will spring into the most genuine pleasure I know: painting.

Standing in front of a clean canvas, I consider with anticipation and choose from many different color options. Once I feel compelled, I take a deep breath and begin. I feel my way with a brush or other tools swiping the canvas. When I capture a pure emotion, I revel with a burst of excitement, my voice rumbles, or I may hum or sing. While scraping the jagged surface, I get more enthusiastic from moment to moment until my canvas has been completely finished to my expectations.”

2015- Kentucky Arts Council awarded Trent Altman as the visual artist for the month in the state of Kentucky, June 2015.

2013 Altman was the winner of ANCA’S INTERNATIONALLY NATURAL AUTISTIC PEOPLE’S (INAP) AWARDS, for visual arts category. Altman was awarded the global artist out of 17 countries. Altman attended the award ceremony with his family in British Columbia, October 4, 2013. Altman accepted the honor to be the USA Autism Ambassador representing his town, his state, and his country.

2013 – Altman accepted the title and role as Autism Ambassador for the United States of America representing his town, his state, and his country for the INAP awards and festival.

2013- SPACE OPERA SOCIETY, will use Trent’s art in nearly all of their sci-fy productions, series and movies in Hollywood.

2013 Valerie Trimble at the Kentucky Education Television produced a documentary, An Art for Expression, about Trent Altman’s art making. The film was nominated for an Emmy, at the National Academy of Television Arts & Sciences. (#1808) Lucille Sharp/Crittenden-Our Town/Northern Kentucky Fort Towns/Trent Altman

2012 Altman received the UNITED NATIONS AWARD WINNING ARTIST of THE AUTISM AWARENESS STAMP. Altman’s image Abstract Garden II was chosen for a stamp. He was one of two artists chosen from the U.S and one of eight chosen around the globe. A series of postage stamps were launched in honor of World Autism Awareness Day. U.N. Postal Administration, printed 1 million of the stamps to be sold at the United Nations: New York, Geneva, and Vienna.

3. EMMY NOMINATED, A DOCUMENTARY: ART FOR EXPRESSION (about Trent Altman, the Artist)

2013 Valerie Trimble at the Kentucky Education Television produced a documentary, An Art for Expression, about Trent Altman’s art making. The film was nominated for an Emmy, at the National Academy of Television Arts & Sciences. (#1808) Lucille Sharp/Crittenden-Our Town/Northern Kentucky Fort Towns/Trent Altman

3. EMMY NOMINATED, A DOCUMENTARY: ART FOR EXPRESSION (about Trent Altman, the Artist), cont.

2014 – The Emmy Nominated film, ‘Art for Expression’ a documentary about Altman’s art making, produced by Valerie Trimble from Kentucky Education Television (KET) was screened at the Golden Door Film Festival in Jersey City, New Jersey. September 16 – 21. Altman had an art exhibit at the screening.

2014 Village Green Hills in Nashville purchased numerous oversized paintings for display in the lobby of a new upscale development.

2011–University of Louisville Autism Center at Kosair Charities purchased 15 pieces of artwork for display throughout the new center.

“Trent Altman does not re-enact ‘The Embarkation for Cythera’ by Jean-Antoine Watteau, but guides the viewer  further through the Isle of gods, via his paintings.  His style is based on the form of Watteau, in a combined style of impasto impressionism, synthetic cubism, and color contrast for energetic communication of focal points. The energy impact of all three styles as non objective art captured Oscar Wilde’s “Nature copying Art.” (Preface of Dorian Grey), and transfixes and comforts the viewers, through their language with nature, into an imaginative and innovative world of the gods by art.

Altman’s work is strong on the physical texture of paint and objects by conforming them to his world. Indeed, a match, as well as, a new approach to the combined worlds of artists styles, like the impressionists : Monet’s broken color, Pissarro’s pattern of broken color, and Van Gogh’s impasto.   Altman’s images are transformed into patterns of Cubism and High Analytical Cubism of  Picasso and George Braque, translating the imaginative form of Watteau’s metaphysical world. He has combined what many artists, in the past, used on a singular basis.

The viewer is taken on a tour, of a new metaphysical world, with the comfort of timelessness, and patterns from objects of nature, working together. It is a calm world transformed by metaphysical beauty and created by poets such as John Donne and George Herbert.  Altman’s  aesthetics has join this group of visual and literary artists, on a strong plain on the Isle of Cythera, as your visual guide of human emotions, dancing to the universal rhythms of nature on another dimension.”

“Trent’s expressionistic style and career history have proven him to be not only a very credible but a well respected artist. In the style of abstract expressionism his paintings are quite captivating. His play with colours and shapes makes you linger, makes you wonder. The texture is also captivating with his use of mixed media. I feel like I’m entering Trent’s soul each time I immerse myself in one of his works.”

2013 — Art and Independence. Kentucky Homes and Gardens. pg. 30 – 33. A four-page layout article about Trent and images of his original paintings. September/October 2013, Volume 10 Issue 5.

2011, Autistic, but So Artistic: Published in the Courier-Journal on May 11 and nationally in the Gannet.

2010 Coffee Table Book–The Art of Autism – shattering seven myths of autism through the voices and art of those on the spectrum. 148-page full-color book. Trent Altman with over 50 artists. Published by Autism Today.

Welcome to Trent’s Studio and art gallery, featuring the work of Trent Altman. © 2019